In advance of the first ever She Climbs event on Friday 4 February, we sent a few questions to all the setters taking part. First up is Emma Twyford.

Emma has an incredible record of achievements - she's flashed both E7 and F8a, headpointed E9 and is the first British woman to repoint F9a.

Mile End Climbing Wall: Can you talk a little bit about your experience as a routesetter, how you got into it and any barriers you have faced?

Emma: I first got into routesetting about 11 years ago when I asked Rob Napier if I could learn to set routes at the Foundry, I did two days being thrown in at the end on the steep wall to start with. I did this for free but got so much useful knowledge from Rob and then it gradually grew from there. It was hard work but I loved the creativity. I’m lucky, I haven’t experienced any barriers really apart from being the only woman on a team for a long time but that is gradually changing. I’m used to climbing a lot with guys so I just learnt to crack on and work hard.

Good routesetting to me is a bit of every style. It is tricky sometimes indoors as you want to force certain moves but ideally it should be aesthetically pleasing, the concept should work well or the moves you want to make people do shouldn’t be cheated. It should be possible for most heights and it should flow well without being dangerous.

What are you hoping to get out of this event?

I’m really psyched to be setting with a strong girl crew and I hope it inspires more women to give setting a go. But also it gives everyone a chance to try some female based blocs.

What are you hoping the participants will get out of it (both the other setters and the public)?

Hopefully it brings something different to the table and inspires climbers/the public. I think it’s a chance to show that women can set a mixture of boulders, not just crimps or slabs. It’s always nice to set with other women because I think it brings a slightly different vibe on the day.

What would you say to encourage female climbers to come and take part?

It’s a chance to come and try some blocs set by women so don’t be shy just come and give it a go and learn some new tricks!

What do you think this event represents for the wider climbing community?

I think it’s nice to have women based events and to grow that community even further. It’s a chance to make new friendships and support each other.

I also think it is important to support other communities within the climbing industry too e.g non binary.

What could climbing walls and the climbing industry be doing to encourage and support more female route setters?

Having some structured support to help potential female setters within climbing walls but also giving them a chance in the first place if they are interested.

I think women tend to struggle more with the confidence to give it a go, if someone does show interest it’s about guiding them through properly with positive encouragement and maybe having an established female setter on the team to help guide them through too so it feels less intimidating.

If women are genuinely interested in setting then don’t be afraid to give it a go, climbing walls need a mixture of styles and each setter brings something different to the mix. It is hard work but as long as you work hard and be part of the team it goes a long way. Listen to constructive criticism and watch other setters to learn tips and tricks on new movement and making setting a little easier each time. If you don’t ask you’ll never know so sometimes it is being brave enough to take the first step. If you’re not sure or still feel intimidated myself and Evie Cotrulia will be running more female based setting workshops this year through creative climbing so watch this space.....

Big thanks to Emma for taking part. You can book your space for She Climbs here (places are going fast so reserve yours soon). 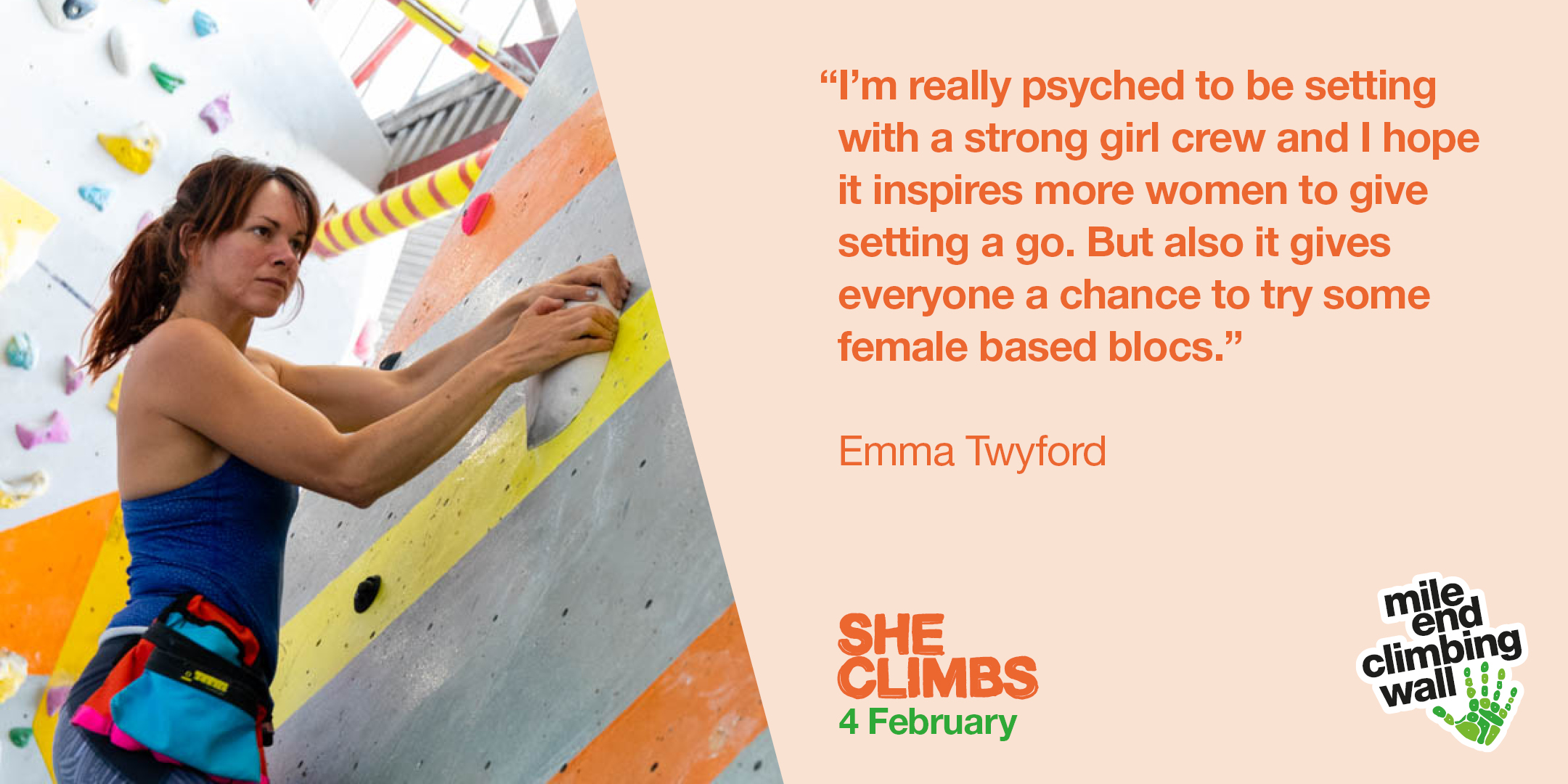